Almost the same holds if $A$ and $B$ are only conjugate by $\mathrm{GL}_n(\mathbf Q)$, except for a few exceptions: we just need to take care to reduce the relation modulo integers $d$ that are coprime to the denominators of the coefficients of $P$ or of $P^{-1}$.

I was quite surprised at first to learn that the converse assertion is false. There are matrices $A$ and $B$
in $\mathrm M_2(\mathbf Z)$ whose images modulo every integer $d\geq 2$ are conjugate, but which are not conjugate by a matrix in $\mathrm{GL}_2(\mathbf Z)$.


From a more elaborate point of view, $V$ is a smooth scheme over $\mathbf Z$ that violates the integral Hasse principle. In fact, $V$ is a torsor under the centralizer of $A$, which is a torus, and the obstruction has been studied by Colliot-Thélène and Xu, precisely in this context. However, I did not make the calculations that could use their work to reprove Stebe's theorem.
Publié par Antoine Chambert-Loir à 8:32 PM No comments :

The goal of this note is to explain a few proofs that these polynomials are irreducible in $\mathbf Q[T]$ — or equivalently, in view of Gauss's lemma, in $\mathbf Z[T]$. This also amounts to saying that $\deg(\Phi_n)=\phi(n)$ or that the cyclotomic extension has degree $\phi(n)$, or that the canonical group homomorphism from the Galois group of $\mathbf Q(\zeta_n)$ to $(\mathbf Z/n\mathbf Z)^\times$ is an isomorphism.

Comment. — From the point of view of algebraic number theory, this proof makes use of the fact that the cyclotomic extension $\mathbf Q(\zeta_p)$ is totally ramified at $p$, of ramification index $p-1$.
Consequently, it must have degree $p-1$. More generally, it will prove that $\Phi_p$ is irreducible over the field $\mathbf Q_p$ of $p$-adic numbers, or even over any unramified extension of it, or even over any algebraic extension of $\mathbf Q_p$ for which the ramification index is prime to $p-1$.

Comment. — Since this proof considers prime numbers $p$ which do not divide $n$, it makes implicit use of the fact that the cyclotomic extension is unramified away from primes dividing $n$. The differentiation that appears in the proof is a way of proving this non-ramification: if $P(\alpha^p)$ is zero modulo $p$, it must be zero.

A 1929 paper by Landau gives a variant of this classical proof which I just learnt from Milne's notes on Galois theory and which I find significantly easier.

We start as previously, $\alpha$ being a primitive $n$th root of unity and $P\in\mathbf Z[T]$ being its minimal polynomial.

This shows that all primitive $n$th roots of unity are roots of $P$, hence $P=\Phi_n$.

Comment. —This proof is quite of a mysterious nature to me.

The cyclotomic extension $K_n$ contains, as subextension, the cyclotomic extensions $K_{p^e}$, where $n=\prod p_i^{e_i}$ is the decomposition of $n$ has a product of powers of prime numbers. By the first case, $K_{p^e}$ has degree $\phi(p^e)=p^{e-1}(p-1)$ over $\mathbf Q$. To prove that $\Phi_n$ is irreducible, it suffices to prove that these extensions are linearly disjoint, which is the object of the following lemma. 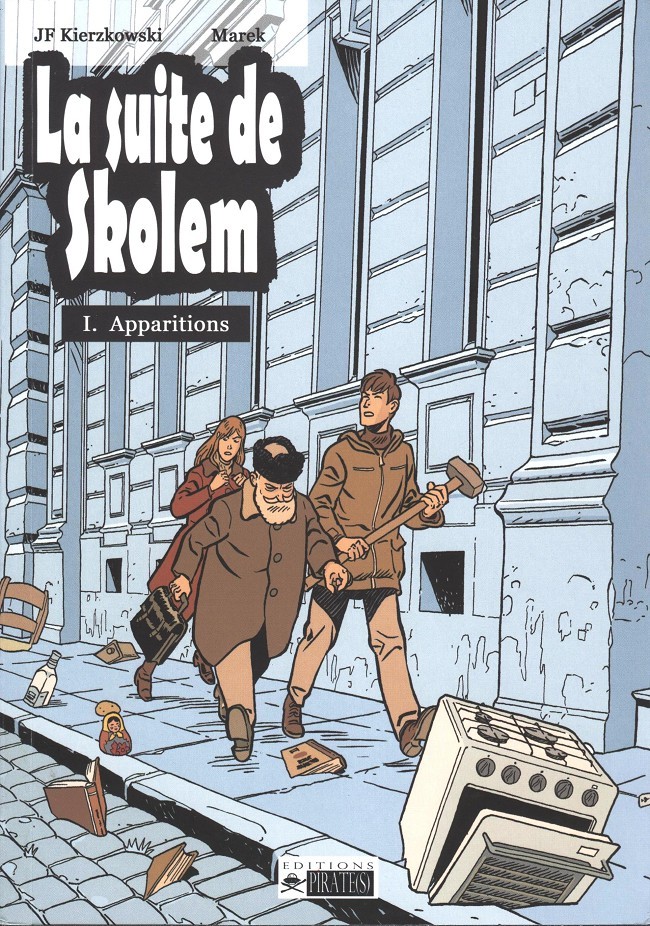 Recently, my father offered me the first volume of a graphic novel by Jean-François Kierzkowski and Marek called La suite de Skolem — Skolem's sequences. I knew about the norwegian mathematician Thoralf Skolem for two different reasons (the Löwenheim-Skolem theorem in model theory, and some diophantine equations that Laurent Moret-Bailly put in a more geometric setting — see his series of papers on Problèmes de Skolem), but I had never heared about Skolem sequences.

The possibility of such sequences has been materialized under the form of a giant sculpture Le jeu des cavaliers by Jessica Stockholder at the Institut des Hautes Études Scientifiques (IHÉS) at Bures sur Yvette.

Skolem's motivation is only alluded to in that paper, but he explains it a bit further next year. In Some Remarks on the Triple Systems of Steiner, he gives the recipe that furnishes such a system from a Skolem sequence. Steiner triple systems on a set $S$ is the datum of triplets of elements of $S$ such that each pair of two elements of $S$ appears exactly once. In other words, they are a $(3,2,1)$-design on $S$ — a $(m,p,q)$-design on a set $S$ being a family of $m$-subsets of $S$ such that each $q$-subset appears in exactly $p$ of those subsets. Some relatively obvious divisibility conditions can be written down that give a necessary condition for the existence of designs with given parameters, but actual existence is much more difficult. In fact, it has been shown only recently by Peter Keevash that these necessary conditions are sufficient, provided the cardinality of the set $S$ is large enough, see Gil Kalai's talk Designs exist! at the Bourbaki Seminar.

My surprise came at the reading of the rest of Skolem's 1957 paper, because I knew the result he then described but had no idea it was due to him. (In fact, it was one of the first homework my math teacher Johan Yebbou gave to us when I was in classes préparatoires.) And since this result is very nice, let me tell you about it.